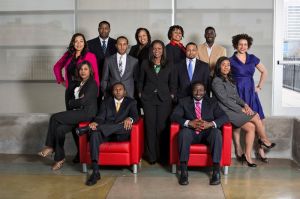 Terri Southall is a member of The Birmingham Change Fund.  Giving Back is in her DNA.

1) Who are and what do you know about your ancestors?

Mother’s Side – Lydia (Garner) Southall Irene and Coleman Wilson lived in Whitehall, LA and had five children. Lydia Wilson (daughter of Irene and Colemen) married William Garner and had eight children. Edna (Sugar Pie) was the eighth child and my grandmother. Edna passed away last August and was the oldest living known family member on my mother’s side. My grandmother was born in 1918. I currently do not have any information concerning my mom’s father. Father’s Side – Walter Southall John Southall and Lucille Southall were my grandfather’s (Benjamin) parents. John worked in the coal-mine and served in the military. Lucille passed away when my grandfather was about six years old. John never re-married. Thomas Ferguson and Ella Mae Ferguson were my grandmother’s (Ella Mae) parents. Thomas Ferguson worked in the coal-mine and served in the military. Thomas Ferguson was biracial (mixed with African American and White). Ella Mae Ferguson was also biracial mixed with Cherokee Indian and African American. Ella Mae was original from the West Indies. My father’s parents, Benjamin and Ella Mae moved to Chicago Heights around 1955 from a farm in Hopkinsville, Kentucky which was owned by my great-grandparents. They had 10 children. Benjamin was a mechanic and a brick-layer and Ella Mae was a house-wife.

I was born and raised in Springfield, IL.

3) During your childhood, how were you exposed to cultures of giving back?

I was exposed to giving back by my grandmother, Edna Garner, who was the Director of General Community Programming for Springfield/Sangamon Community Action Agency and my father, Walter Southall, who worked for Springfield Housing Authority. As a child growing-up I was surrounded by people who were active in the community and worked for equality in our community. Hearing conversations of equality and change was common in my environment. I always say “that being active in the community is in my DNA.”

4) How has your giving changed by being in a giving circle?

My concept of giving has changed since becoming a member of the Birmingham Change Fund (BCF). Giving back as an individual will have an impact on the community, but giving back as a collective group with like-minded people will have a greater impact.

5) How do race and culture influence giving, in your opinion?

Before attending my first Community Investment Network (CIN) conference in Birmingham last year I would have answered this question differently. Since being educated on philanthropy, I now understand that race and culture has little influence on giving. Philanthropy means “love of humanity” which means anyone that has love for people can be a philanthropist.

6) What issues most concern you? Why?

7) What surprised you about being a philanthropist?

I thought a philanthropist was an extremely wealthy person who gave back before being educated about philanthropy with the assistance of the BCF and CIN. I discovered, I was a philanthropist at a very young age and was not aware of it because I always had a heart to give to others.

Yes – I wanted to ensure my family was aware of my last wishes and protect them.

9) What is 1 request and 1 offering that you have for your community?

My one request for my community is to have people not live without barriers, which will assist with people reaching their full potential. My one offering for my community is my education in Science Technology Engineering and Mathematics (S.T.E.M). I currently use by background to tutor students at my church.

10) What is your greatest hope for humanity?

My greatest hope for humanity is having people understand their differences and be able to work through them regardless of the situation.

This entry was posted in Member Profiles. Bookmark the permalink.

1 Response to Making a difference: 10 questions for Terri Southall